Skip to main content Skip to search
You are here

It all started in the early January this year. People of the Lungnak (Tsarab / Tsarab Lingti / Lingti) Valley noticed unusually low level of water in the river. A helicopter was sent to the upper part of the valley for a research. The Tsarab River (also called Phukthal or Phuktal River as it passes near to the Phuktal Monastery) sources on the main ridge of the Great Himalayan Range near to Baralacha La - the major pass on the Manali - Leh road. It flows near Sarchu, is followed by the road for a while then enters an uninhabited valley just below the place called Barandy Nala (Gian) where the Manali-Leh road leaves it to climb to Nakee and Lachulung passes. The trekking route number 2 described in my guidebook follows that valley. It is one of my favourite trails in the region and I had the chance to trek it again this September. The route follows the river for three days then crosses some high passes to detour a very narrow section of the valley and return to it before reaching the Phukthal Monastery. And this is the place where a huge landslide blocked the valley in winter and caused a lake to be formed. The lake has been discovered by the helicopter in early January.

The Tsarab River passes near to Phukthal, joins Kargyak which flows from Shinkul La along the Darcha-Padum popular trekking route (Trek 3 in the book) and reaches Padum - the major settlement of Zanskar. It joins the Stod (Doda) River there and flows towards Central Ladakh and Indus, to the North as the Zanskar River.

Winter is the season when the Zanskari people (people of the part of Ladakh located in the upper part of the Zanskar Valley and its tributaries) use the frozen Zanskar river as a trail to Central Ladakh. With roads closed for winter, the frozen river trail - so called Chadar Trek - is the usual winter way out of the Zanskar Region. It is also quite a popular winter trek for tourists. With landslide caused dam on the river and the newly formed lake in the upper part of the major tributary of the Zanskar River there was a danger of sudden outburst of water and washing out anyone who would be on the ice. Therefore the authorities prevented both tourists and locals from walking on the Chadar this winter.

The flood did not come in winter, however. The lake did not last for long neither. The dam was broke with the spring ice melting and the sudden flood came on May, the 7th. A newly built school below the Phukthal Gompa was washed away, most of the bridges between that monastery and the confluence of the Zanskar and Indus Rivers, including the road bridge on Lungnak (Tsarab Lingti) between Ichar and Raru as well as a newly built bridge on the lower Zanskar River linking the Kaya village in the Markha Valley with Chiling and Leh, were damaged.

The local agencies claimed this spring that the routes would be fixed before the high-season which is in summer. Indeed, routes were open but some of them followed alternative pathways, in places following opposite sides of rivers.
As I visited Ladakh (including Zanskar) a few times this year, I had a chance to see the damages as well as the progress in fixing the routes and bridges. The description below should be helpful for anyone planning a trek in the next season. My last visit to Zanskar was in late September and the information refers to that time.


There is a copy of this blog and this post in particular at blogspot.com. If you wish to comment this post, it would be probably easier to do it there. 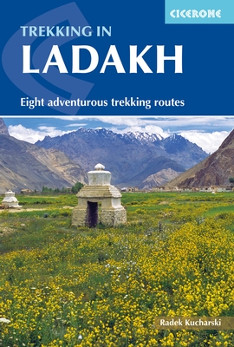 Guidebook to 8 challenging treks in the fantastic region of Ladakh!
Follow @ladakh_pl